IT WAS THE GLORIOUS CAUSE 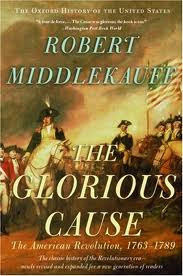 Part of the Oxford History of the United States Series

As I continue my march through the ages, where I explore all the historical eras of the United States of America, I finally arrive at the age and event that would create the nation itself. Having finished Fred Anderson Crucible of War, I had already arrived at that generation of Americans, which we would describe as the Founding generation, and they were living under the man they would call tyrant, King George III. As I stated in an earlier post the biggest challenge in this little project is to find books whose authors try their best to explore from multiple perspectives to avoid just one narrow view, without at the same time surrendering a general narrative that is both readable and enjoyable. I found this book to meet those qualifications.

Robert Middelkauff's brings the conflict that gave birth to the United States of America to life in his classic work, The Glorious Cause. This book tells the story of thirteen colonies who revolted against the mother country of Great Britain to form their own nation. The story begins on the close of the French and Indian War (or Seven Years War) where the British Empire was triumphant,the greatest power of North America, and undisputed ruler of the sea. The story ends with George Washington taking office as the first President of the United States. 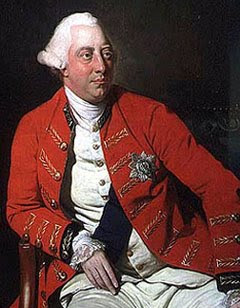 We tend to think of the American Revolution as happening from 1774-1783 but Middelkauff believes that it began in the 1760s. He argues this even though the American disagreement with the mother country during the late 1760s and early 1770s was about their rights as British subjects in the Empire, not trying to break loose from it. He also points out that the Revolution does not end at Yorktown or the Treaty of Paris but with the Constitutional Convention, the Constitution's ratification, and the inauguration of President George Washington. 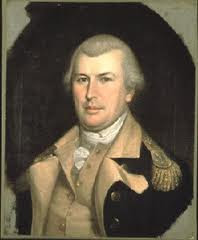 One of the main sources of disagreement with Great Britain and her colonies was two very different views that were held on the unwritten constitution of the British Empire. One view, held by Americans, was that all British subjects could not be governed and taxed without their consent; and the other, held by many in Britain, was the British Parliament was the supreme legislature of all the inhabitants of the Empire whether or not that community was had representation in the House of Commons. With the insistence of the various ministers of King George III, with His Majesty’s full support, Parliament attempted to level taxes on the colonies. The response from the colonies was resistance from all levels of colonial society.

“A single act of Parliament led by an evil ministry would not immediately fasten chains on colonial wrists, of course. As far as the American writers were concerned, the Stamp Act was simply the visible edge of the dared conspiracy. If the Act were accepted, they asked, what guarantee did the colonists have that their lands, houses, indeed the very windows in their houses, and the air breathed in America would not be taxed? A people virtually represented in Parliament would have no choice once they swallowed that pernicious doctrine which was in reality shackles for the enslaved. And there would be many hungry men in England eager to do the work of the enslavers. Colonial accounts of the conspiracy lingered over long and horrified descriptions of the officeholders, placemen, taskmasters, and pensioners who would descend upon the colonists ostensibly to serve His Majesty but in reality to eat out of the colonial substance. The corruption they would bring would complete the ruin of the colonies.”p.132

(One of the Revolution's most respected leaders, Ben Franklin)

This common cause of liberty was able to unite the colonies as nothing had ever had before; colonial legislatures sent representatives to a Continental Congress that would try to negotiate with Parliament. When negotiations failed and the war came at Lexington and Concord, this Congress would raise and Army and appoint a commander-in-chief. The next Continental Congress, when the time came, would go forth and declare their independence and form a new nation. 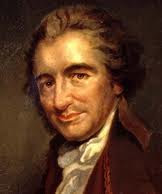 “What Americans thought and felt about the declaration's 'truths' which are presented as 'self-evident'--that all men 'are endowed by their creator with inalienable rights,' among them 'life, liberty, and the pursuit of happiness'--is not clear. There was no immediate discussion in public of these claims; nor was there of the contention that all men were 'created equal.' Thomas Jefferson wrote these words and though at the time, and since, no great originality was attributed to them and to the substance of the declaration, the declaration may in fact have possessed more originality than anyone suspected.”p.335

(Thomas Jefferson, primary author of the Declaration of Independence)

One of the great elements of this book is the way it tries to cover all aspects of society, from the court of King George III to the farmers of Massachusetts. The stars of history still get there well-earned due, George Washington makes the most appearances, but also covered are Patrick Henry, Samuel and John Adams, Thomas Jefferson, John Paul Jones, Thomas Paine, Nathanael Greene and, of course, Benjamin Franklin.

“Washington's judgment improved each year, as he assimilated the experience of the war. His confidence in himself also grew as he learned. When the war began he as full of concern that he would fail because his abilities were not of the first order. This belief persisted even though he also felt that he had been called by providence to lead the American army in the Revolution. By the end of 1776 with a year and a half of the war under his belt, and with the success of Trenton and Princeton, he was a much more confident commander. He was not arrogant, and he continued to consult his general officers before he made important decisions, but he no longer took advice against his better judgment, as he had, for example, in the autumn of 1776 on the Hudson.”p.600

After the Revolutionary War comes to an end, the Revolution was still unfinished for a Revolution cannot be complete until something lasting has been built up to replace the old regime. The Articles of Confederation were not up to task and ultimately the Constitutional Convention would have to be held to create a lasting Republic in which the Federal Government was supreme and not the various state governments.

I would also like to point out a technical detail that I like about this book. All the footnotes are located at the bottom of the page they are on as opposed to either at the end of the book or the end of each chapter. I find this makes reading the book more enjoyable because that way I do not have to flip though pages to find the source of any particular fact or argument. I wish this method was mandatory.

The Glorious Cause is an incredible book and I would recommend it to the novice and the experienced historian alike.

{Video is from the History Channel's America: The Story of US and HBO's already classic John Adams series}