A review of Sir Nigel Bagnall’s The Punic Wars: Rome, Carthage, and the Struggle for the Mediterranean (1990)

This book was the first of two works by Sir Nigel Bagnall, who had been a field marshal in the British Army to which this book is dedicated. I had reviewed his later work, about the Peloponnesian War, a short time ago. I was not a big fan of the other piece of history that this writer produced but I really liked this book. The Punic Wars is an incredible tale of two great civilizations that went on a collision course against each other that would result with one becoming a world power and the other completely annihilated. When writing about each of the three wars Bagnall focuses on one theater at a time, telling each theater’s story rather than proceeding in complete chronological order. This helps the book flow better and does not harm the general narrative.

Bagnall starts of by giving the reader a bit of background of the two major civilizations; we know more about the Romans of course because they were not destroyed as thoroughly as they destroyed Carthage. He traces the rise of the two cities from mere cities to the heart of minor empires in the Mediterranean, one a land power and the other a sea power. Both cities have to adapt when they fought each other in the First Punic War. Rome would create a navy that would overtake Carthage, and Carthage would also learn how to use its natural military advantages such as trained elephants and a diverse Mercenary army composed of its subject peoples. 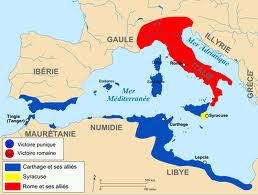 The Second Punic War focuses on the great general, Hannibal Barca. His training under his father, Hamilcar, and his rise in Spain are covered. Hannibal crosses the Alps and, for years, ravages Italy and nearly destroys Rome. The famous Fabius Maximus creates what is known as the ‘Fabian Strategy‘ in order to defend against Hanibal, that is do not fight him directly only indirectly by cutting supply lines and forms of harassment. The book covers how Rome had a hard time sticking to this strategy until the rise of Publius Cornelius Scipio Africanus who would ultimately beat Hannibal. 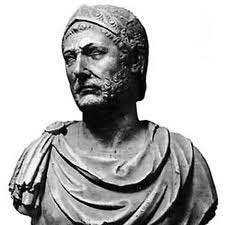 
“On taking up his appointment, Scipio faced the task of welding a disparate lot into a cohesive fighting force: there were the dispirited survivors of the defeated legions, the raw reinforcements fresh out of Italy, and Spanish mercenaries of uncertain loyalty. No light task for a young man, especially one whose close relation had so intimately associated with disasters. But Publius Cornelius Scipio (later given the cognomen Africanus) was remarkable. As Polybius says, he was ‘perhaps the most illustrious man of any born before the present generation’, and one of his first acts was to show his trust in Marcellus, the man who had striven so hard to rally the survivors of the two Scipios’ shattered army, but who could now well be regarded as an awkward rival.” p.206 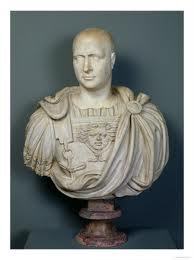 The Third Punic War would be the end of mighty Carthage. The city would be defeated, raised, and destroyed by Scipio's grandson. The impact of Carthage, fulfilling the dream of Cato the Elder, would be erased even though another one of Scipio’s own grandsons would try to argue against it.

“He pleaded that though Rome’s position as the dominant power should be preserved, Carthage should not be destroyed as a rival. Were this to occur, there would be no check on Rome’s arrogant disregard for the legitimate interests and the concerns of smaller states. She would lose all sense of shame when there was nobody of stature to pass judgment on her conduct and stand up for the rights of others. Moreover, in the absence of any external threat, the Roman Confederation would be in danger of disintegrating as fractious political and social groups pursued their own self-interested ends.” p.307 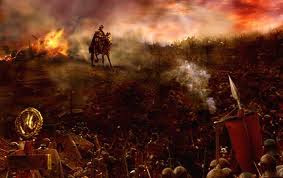 I highly recommend this book to anyone. It is a thrilling read involving one of the greatest struggles in the history of the world: Rome and Carthage. Not until the Cold War would the world see another quite like it. This work of Nigel Bagnall was much stronger than his later work on the Peloponnesian War; however I leave open the possibility that the reason for his Punic Wars being easier to understand maybe due to the fact the the Punic Wars are an easier conflict to understand compared to the Peloponnesian War. 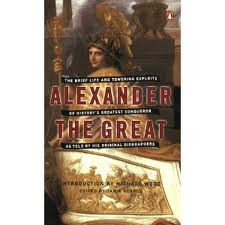 A review of Tania Gergel’s Alexander the Great: the Brief Life and Towering Exploits of History’s Greatest Conqueror as Told by his Original Biographers (2004)

With an introduction by Michael Wood, who in the 1990s produced the BBC series In the Footsteps of Alexander the Great, this book was assembled by Tania Gergel who took the work of three famous Alexander the Great biographers—Lucius Flavius Arrianus (Arrian), Plutarch, and Quintus Curtius Rufus—and edited them into a single narrative. All the authors are citizens of the Roman Empire writing centuries after Alexander had died, but they are closer to his time then we are to theirs.

Gergel does an excellent job of taking the best of the three works and making them into one single narrative. The story goes from Alexander’s princely boyhood to the death of the King who was ruler of the all the world that was known to him. 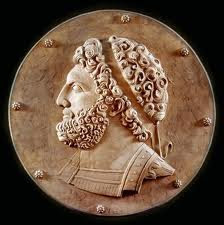 For years the Persian Empire had been the greatest threat to the freedom of Greece, the invasions of Darius I and Xerxes the Great had ended the polis or city-state of Greece and led various leagues and counter leagues transforming the culture of Greece from a free collections of city-states into the foundation for an empire. Alexander's father, Phillip, had brought Greece under the thumb of Macedon. Alexander takes the long-standing Greek conflicts, and brings a new war to Persia itself, invading and conquering the greatest power in the ancient world. 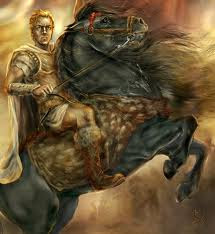 The Alexander portrayed in this text is a young man of brilliance and inexhaustible ambition. He is viewed as good person who kind and charitable but becomes corrupted with power and does cruel things even to his closest friends. Although the would later regret some of his actions his remorse comes only after the evil deed is done. Yet his flaws are from the same source as his strengths so it is hard to tell if he could be any other way. 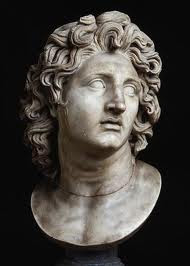 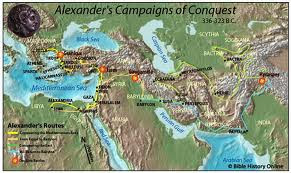 “Meanwhile some of the older of his companions, and Parmenion in particular, looked out over the plain between the river Niphates and the Gordyaean mountains and saw the entire plain agleam with the watch-fires of the barbarians, while from their camp there arose the confused and indistinguishable murmur of myriads of voices, like the distant roar of a vast ocean. They were filled with amazement at the sight and remarked to one another that it would be an overwhelmingly difficult task to defeat an enemy of such strength by engaging him by day. They therefore went to the king as soon as he had performed his sacrifice and tried to persuade him to attack by night, so as to conceal from his men the most terrifying element in the coming struggle, that is, the odds against them. It was then that Alexander gave them his celebrated answer, ‘I will not steal my victory.’ Some of his companions thought this an immature and empty boast on the part of a young man who was merely joking at the presence of danger. But others interpreted it as meaning that he had confidence in his present situation and that he had correctly judged the future. In other words, he was determined that if Darius were defeated, he should have no cause to summon the courage for another attempt: he was not to be allowed to blame darkness and night for his failure on this occasion, as at Issus he had blamed the narrow mountain passes and the sea. Certainly Darius would never abandon the war for lack of arms or of troops, when he could draw upon such a vast territory and such immense reserves of manpower. He would only do so when he had lost courage and become convinced of his inferiority in consequence of an unmistakable defeat suffered in broad daylight.” p.70-1

This is a great little book. I would highly recommend to anyone wanting to know more about the life of the man who conquered the world before he was thirty—literally!

{Video from the BBC Documentary In the Footsteps of Alexander the Great.}

Posted by Jeremy A. Perron at 1:55 AM No comments: 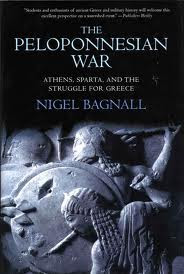 A review of Sir Nigel Bagnall's The Peloponnesian War: Athens, Sparta, and the Struggle for Greece (2004)

Sir Nigel Bagnall was a British military officer during the mid-to late twentieth century rising to become Chief of the General Staff. After an extraordinary military career, he began a second career as a writer during which he wrote two volumes in ancient military history. This work was his last book which was published posthumously. His first work, The Punic Wars, which will be reviewed later, focused on the war between Rome and Carthage; this work focuses on the even earlier conflict, the Peloponnesian War. This famous conflict between the two most famous city-states of Ancient Greece, Athens and Sparta, is a conflict that is at best really confusing, and unfortunately this book does not succeed in making it less confusing. As a historian telling a tale, one must decide if he or she is to proceed chronologically or categorically, most historians do some of both but Bagnall leans a little too heavily with a categorical focus. 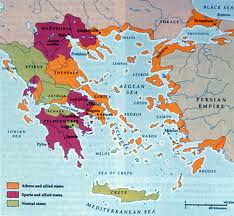 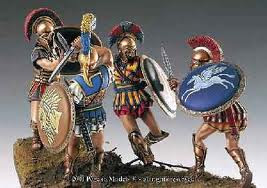 The first forty-five pages of the book are historical notes that deal with all the Greek cities that participated in the conflict. In doing this he should have limited these brief histories up to the start of the rest of the book instead of the roles that each city played during the conflict. Sir Nigel might have been better served scraping the whole forty-five pages and instead give us a one-page timeline in bullet points in order to give a clear picture to his reader about how this whole event happened. Also, we do not arrive to the actual Peloponnesian War into chapter 6 starting on page 131! The earlier Greek wars with Persia dominated the first four chapters, I understand how a historian might feel that one event cannot be explained without really explaining an earlier event, but in doing so he over explains somethings and under explains others. For example, an explanation into the forming of the Delian League and how Athens itself became corrupted with power transforming the League it into an Athenian Empire that was ruthless—to say the least—to dissenters, is confusing. How central figures played role in the war and the events leading up to it deserves more attention than it gets. I realize that Bagnall was a military historian and not a political one, but his take on Pericles is so choppy and out of order that at times it is difficult to put into context.

One of the strengths in the book is how Bagnall uses his own knowledge of military history, plus what he saw in his own career to help compare and contrast the Peloponnesian War to more commonly understood historical events, such as World War II or the Cold War, to increase the readers understanding of this ancient conflict.

This is an okay book but it is more suited for someone who understands a good deal of the material already, such as a person with a focus of study on ancient or military history. I would not recommend it for the average reader wanting to learn about ancient Greece for the first time since public school.

Posted by Jeremy A. Perron at 9:18 PM No comments: