AND NOW WE ARE A NATION 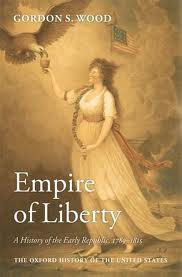 Part of the Oxford History of the United States Series

Before I begin I would like to point out that I actually had the opportunity to meet Professor Wood when he was giving a lecture at the University of New England in September 2010. I was very impressed by his presentation and he even signed my copy of Empire of Liberty.

As I continue my march through the ages in which I explore all the historical eras of the United States of America, my journey takes me to the beginning of our modern government. Since I finished Robert Middlekauff's The Glorious Cause, which deals with the American Revolution and the Constitutional Convention, I now arrive as the U.S. Constitution is being implemented and the new government is just getting its metaphorical feet under its legs. As I stated in earlier posts the biggest challenge is to find books that try their best to explore from multiple perspectives to avoid just one narrow view, without at the same time surrendering a general narrative that is both readable and enjoyable. Gordon Wood’s book more than meets those qualifications.

The book begins with a discussion of the Washington Irving story of Rip Van Winkle, a story many us remember from childhood in which a man falls asleep for twenty years. Wood reminds us of political implications of that story. How Van Winkle falls asleep prior to the American Revolution and wakes up in the America of 1790s and marvels how the world has completely changed.

The historical narrative begins as the nation writes and ratifies its new Constitution and concludes at the end of the War of 1812. This book tells the tale of two generations, the Revolutionary generation of the Founding Fathers and the second generation of J.Q. Adams, Henry Clay, and Andrew Jackson. The book in way covers how the Founders governed the country in the early Republic and although the book does not feature the passing the torch from one generation to another , it clearly shows a nation where over eighty percent of its population is under the age of forty. In this narrative a young nation is still trying to find and define itself. 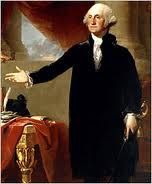 (George Washington as President,this was the painting that Dolly Madison saved from the fire that burnt the White House)

Early on the government under President Washington tries to mimic the British government's success without emulating its traps such as hereditary monarchy and aristocracy. The early administrations of Washington and Adams have a lot of success in helping the government find its feet by making good on treaties, establishing the public credit, kept the nation out of war, and being able to defend itself from internal problems such as the Whiskey Rebellion.

“The Senate considered itself distinctly superior to the 'lower' house, so-called perhaps because the House chamber was on the first floor of Federal Hall, while the Senate chamber was on the second floor. Although the Senate was not entirely clear about its relationship to the various state legislatures, which, of course, were its electors, it certainly did have a very high-flown sense of dignity. While the House was busy passing legislation, establishing revenue for the new government, and erecting the several executive departments, the Senate spent its time discussing ceremonies and rituals, perhaps because it had little else to do.” (p. 63)

The Washington Administration did not really appreciate how bad Hamilton's programs—no matter how successful—would look to members of the public, who are terrified of tyranny, might view a growing executive. They did not care as much as they should because their views on how the Republic was supposed to look was greatly different than others. When the Adams Administration and Congress began to oppress the people's liberty with the Alien and Sedition Acts, the people would find a champion in Thomas Jefferson.

(Thomas Jefferson, champion of the people)

After the election of 1800, the historical narrative stops and Wood takes some time to inspect Jeffersonian America by taking an in-depth look at each area of society, from the west, to the everyday people, the religious establishments, and more. This book gives you the very feel of the nation as it was in the early nineteenth century. 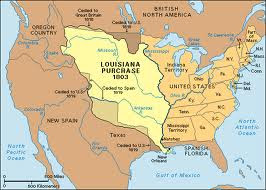 The book also discusses Jefferson's greatest triumph of his presidency, the Louisiana Purchase and Lewis and Clark Expedition to explore it. Jefferson doubled the size of the nation and unintentionally secured the power of the Federal government of the United States. And while the accomplishments of Presidents Jefferson and Madison were many, they did make a good deal of mistakes such as the Embargo act of 1807 that both devastated the county and forced President Jefferson to take a line with dissenters that would have made Alexander Hamilton proud. They also allowed for ideology to cloud their judgment and lead the nation into a disaster.

“Although the Republicans in the Congress knew that the country's armed forces were not ready for any kind of combat, they nonetheless seemed more concerned about the threat the American military might pose to the United States than to Great Britain.” (p. 671)

The War of 1812 nearly brought America to its knees but critical victories at Baltimore and New Orleans helped rally the American spirit. In the end of the War of 1812, even though the capital had been lost in the fighting American nationalism soared to a new height.

In the end the Founding Fathers that lived the longest seemed to be suffering from a Rip Van Winkle symptom as they could no longer recognize the nation that they had founded forty to fifty years later. This was most true for former President Thomas Jefferson.

“Although the world of the nearly nineteenth century was spinning out of Jefferson's control or even his comprehension, no one had done more to bring it about. It was Jefferson's commitment to liberty and equality that justified and legitimated the many pursuits of happiness that were bringing unprecedented prosperity to so many average white Americans. His Republicans followers in the North had created this new world, and they welcomed and thrived in it. They celebrated Jefferson and equal rights and indeed looked back in awe and wonder at all the Founders and saw in them heroic leaders the likes of which they knew they would never see again in America. Yet they also knew that they lived in a different would that required new thoughts and new behavior.” (p. 736)

On a technical note, like the previous volume of the Oxford series,the footnotes are located at the bottom of the page they are on as opposed to either at the end of the book or the end of each chapter. I find this makes reading the book more enjoyable because that way I do not have to flip though pages to find the source of any particular fact or argument. I say again that I wish this method was mandatory.

Empire of Liberty is for the advanced reader who would like to receive an incredible amount of information about our nation in its earliest stages. I would highly recommend this book to anyone who is open to that challenge.