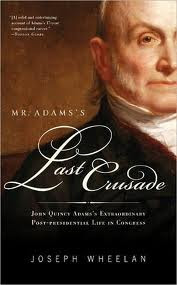 As explained by the title, Joseph Wheelan’s book covers the second President Adams' career as a member of the U.S. House of Representatives.  Most presidents who have served in the House of Representatives did so at an earlier stage in their careers. (Examples: James Madison, John F. Kennedy, and George H.W. Bush.)  Their House membership was a stepping-stone on the way to bigger and better things.  John Quincy Adams however became a member of House after he was President of the United States.  While many see this as a huge demotion, Wheelan explains that in many ways Adams was freer than ever to conduct himself in the manner that he thought a statesman should act: on principle not politics.

“Besides being arguably Congress’s most learned member—and undoubtedly the oldest—Adams was also one of the most resilient and hard-working of the representatives, often the first to take his seat and the last to leave.  When the House recessed for dinner and then resumed work that continued into the night, Adams found it agreeable to spend the hour, while his colleagues dined at their lodgings, in a House conference room, writing letters while consuming five or six small crackers and a glass or water.  ‘I am calm and composed for the evening session, and far better prepared for taking part in any debate than after the most temperate dinner at home or abroad.”(p.137)

Congressman Adams had strong beliefs and he would stand up for what was right not what was popular.  Despite this he never challenged slavery, until slavery challenged him.  He might not have turned it into his private war if it had not been for the South’s foolish attempts to shut down even the discussion of slavery.  In his battle against the gag rule Adams became the defender of many unpopular causes.

“Adams had become the de facto chief spokesman for many of those denied a voice in government—abolitionists silenced by the Gag Rule, slaves, Indians, and finally, women.  One may ask why Adams took on this role, but a better question is, Why did he have no company?  Almost alone among his fellow congressmen, all a generation his junior or more, Adams believed in and upheld the principles of the Founding Fathers embodied in the individual liberties of the Constitution and the Bill or Rights, in the soaring words of the Declaration of Independence, and in the antiquated ethic, which went by the board with his father’s defeat in 1800, of nonpartisanship and selfless public service.” (p.150)

Adams even became a defender of women’s involvement in political life.  Although not a suffragist, he fought for the basic human right to speak and be heard.  The women that he was defending were members of the abolitionist movement.  Their participation in this movement would later lead to the beginnings of the suffragist movement.

“Congressman Benjamin Howard of Maryland aroused Adams’s indignation by declaring that women did not belong in ‘the fierce struggles of political life,’ but in the home.  Adams had provoked Howard’s assertion by presenting a petition signed by women opposed to annexing Texas.  Before Adams had finished responding to Howard’s pronouncement, Howard must have wished that he had not said anything at all.” (p.150-1)

One of the most famous of cases that was argued by Adams was in defense of the African prisoners of the Amistad who had rioted in their cause for freedom.  Adams was originally unsure whether or not he should even do it for he had not argued in front of the Supreme Court in decades.  He nevertheless proved victorious and the captured Africans went free.

“Adams, arguably the greatest American secretary of state, scorned Forsyth’s eagerness to cooperate with Spain’s ‘inadmissible and insolent demands.  His voice dripping with sarcasm, Adams said the Spanish minister wished the president to use ‘absolute fiat’ to pluck the Africans from the courts and sent them to Cuba.  ‘Is the Khan of Tartary possessed of a power to meet demands like these?  I know not where on the globe we should look for any such authority, unless it be with the Governor General of Cuba with respect to negroes.’” (p.181)

“Adams asked the justices to imagine that the Amistad was an American vessel with a cargo of African slaves that had tied up at a U.S. port.  ‘The captain would be seized, tried as a pirate and hung! And every person concerned, either as owners or on board the ship would be severely punished.’” (p.182)

The passion that John Quincy Adams had for the causes that he felt were in the right impressed even some of his enemies.  It kind of reminds me of Pope Sixtus V wishing that Queen Elizabeth I was a Catholic queen.

“Even Adams’s Southern adversaries grudgingly professed admiration for his intellectual and rhetorical gifts.  ‘They call Adams a man of one idea,’ South Carolina Congressman Isaac Holmes was heart to say, ‘but I tell you what it is, he has got more ideas than all of us put together.’  South Carolina Congressman Francis Pickens remarked, ‘Well that is the most extraordinary man on God’s footstool.’  Even Marshall, badly mauled by Adams rhetorical onslaught, granted that if somehow Adams could be removed or silenced on the subject of slavery, ‘none other, I believe, could be found hardy enough, or bad enough, to fill his place.” (p.201)

In the my review of the previous book I had read on Mr. Adams' I stated that presidents were always incredible statesmen but they were not always successful as president.  John Quincy Adams' time as president was a failure but this book will show you that John Quincy Adams career was a success.