NOT A VAMPIRE HUNTER 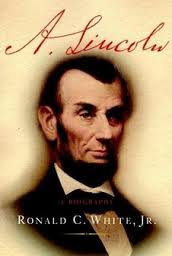 Written in time for President Lincoln’s bicentennial year, Ronald White's new Lincoln biography tells the story of the Nation’s sixteenth president.  The book that this one is most compared to is David Herbert Donald’s Lincoln from 1995.  I like both of these works.  Donald prepared more information on Lincoln and the world around him, while White has smother narrative that is strong enough for someone who reads a great deal of history but not overwhelming for a newcomer.  Both are good they are just different.  A. Lincoln is the story of this most remarkable American, who did not hunt vampires.

One of the main focuses of this book is how President Lincoln redefined the role of commander-in-chief.  White points out that even presidents who had military background did not have a large role as commander-in-chief, and the two wars that were fought after the Constitution was established (1812 and Mexican-American) Presidents Madison and Polk managed the politics at home while they allowed their generals to have a free hand running the military aspect war.  Lincoln was a different commander-in-chief, he handled both the politics at home and closely oversaw the military aspect as well.  Lincoln had a mission for the military and he was going to see it through.


“Lincoln quickly learned that his own military leaders were often the greatest obstacles to military policy.  The professional military leaders, almost all graduates of West Point, were trained for the battlefield.  Used to operating within a chain of command that did not include political leaders, and certainly not the president, many did not take kindly to Lincoln’s growing involvement in what they saw as their field of expertise.  As Lincoln would become more and more a hands-on commander in chief, tensions with some of his military leaders would grow.
Lincoln began to insist that he as president was the first and last authority in setting military policy.  Critics railed that he was expanding the power of the presidency, some going so far as labeling him a ‘dictator.’  Perhaps the greatest irony, some said, was that thirty years before a young Lincoln had joined the bitter criticism against ‘King Andrew’ Jackson—calling him a dictator.  Now Lincoln had selected the old general’s portrait to hand in his office.  But it needs to be remembered that Lincoln followed three weak and ineffectual presidents.  The odor of Buchanan’s indecision in the year leading up to the Civil War still stuck in the nostrils of Washington politicians, even in Buchanan’s own Democratic Party.” (p.411)

President Lincoln would dismiss general after general until he finally got the man he wanted in Ulysses S. Grant.  When Lincoln finally had a general whose philosophy was identical to his own, he let loose his grip on the day-to-day operations of the army.  He still expanded his powers as president in many ways, most famously, with the Emancipation Proclamation.

One of the things I like about this book in terms of style is the set-up of the pictures, maps, and illustrations.  I wish publishers would do this more; the pictures are located within the text not collectively gathered and stuck in the book in some random separate section.  This allows the material to become part of the narrative instead of some random add-on.

I really enjoyed this book.  A. Lincoln is a good starting point for people who would like to gain a greater understanding of the man who is arguably the greatest President of the United States.  His story is interesting enough without having to make stuff up in order to bolster it.

(Video is from a preview of the new Lincoln movie coming in November, which I swear I will watch so many times I will be able to say all the lines along with the characters.)