USHERING IN THE MODERN WORLD 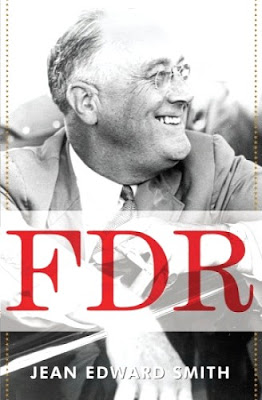 Franklin D. Roosevelt was the most important person of the twentieth century, he helped the United States shake off bonds of the nineteenth century and prepared the nation to accept it's new role as a global superpower. When he came to power of March 4, 1933 after the stunning November 1932 election, the nation was at its weakest point since the dark days of the Civil War. The nation had been crippled by the devastation of the 1929 crash, and a man, who was himself disabled, was going to show the nation how to stand. Smith tells an incredible story of a remarkable human being.

Franklin D. Roosevelt was born to extreme privilege. Smith explains that both his families, the Roosevelts and the Delanoes, were extremely rich. He was the only child of his mother (Sara Delano Roosevelt) but he was his father’s (James Roosevelt) second son. However, his older half brother, James R. Roosevelt, was the same age as Franklin’s mother so, Franklin grew up as an only child of a rich household. Smith illustrates that Roosevelt’s parents disagreed on what to name him. Each parent wanted to name him after his or her respective father. Since Sara could not stand Isaac—the name of James’s father--, they settled on naming him after her father, Warren Delano. However, when Sara’s nephew who was also named Warren died, they decided instead to name him after Sara’s favorite uncle, the childless Franklin Delano. Uncle Franklin was also very wealthy and without an heir, which caused some suspicion of Sara’s motives. 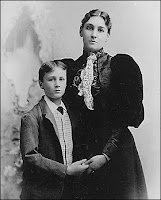 (A young FDR and his parents)

His distant cousin, Theodore Roosevelt, the Rough Rider president who most historians call the ‘first modern president’, inspired a young Roosevelt to take up a public career of his own. He would even court and wed the President’s niece Anne Eleanor Roosevelt*. Known as ‘Eleanor’ at this stage of her life she very simple minded with very little hint that she would one day evolve into one of the most important women in human history. Both in the beginning lack that passion that would one day make them great. FDR was building a career for a career’s sake and any good he did during this period was simply to further his ambition**. He would serve in the New York State Senate, and later, for President Wilson, he served as the Assistant Secretary of the Navy and earned the Democratic Party’s Vice Presidential nomination in 1920.

“Franklin was little liked in Albany. Most of his colleagues found him insufferable. Al Smith wrote him off as a dilettante—‘a damn fool’ who thought more about political appearances than substantive legislation. Robert Wagner saw him as a stage dandy interested only in publicity: ‘Senator Roosevelt has gained his point. What he wants is a headline in the newspapers. Let us proceed to our business.’ The elderly Tom Grady, who had served in the legislature with TR, thought Franklin the more obnoxious of the two. Even the genial Tim Sullivan, a man of exceptional warmth and kindness, believed him to be ‘an awful arrogant fellow.’ p.79

Then in 1921, FDR would face the greatest challenge of his life, his body stricken with what most believed to be polio, a man who had been a his peek physically was stricken down and for the rest of his life he would be deprived of practical use of his legs. He would have to go through the greatest test of his character and to answer it he would go to Warm Springs. At Warm Springs he heal enough, more mentally then physically, to challenge the world again, and this time with a real purpose to help those far worse off then him.

“For FDR, Warm Springs offered the opportunity to be in complete change of a significant undertaking—a means a reestablishing his self-esteem. Warm Springs would be his alone, a haven much like Val-Kill was for Eleanor: a place where he could do as he pleased, when he pleased, free from the formality of Hyde Park and East Sixty-fifth Street. More to the point, it provided an opportunity to participate in the fight against polio. Roosevelt had no special training in physiotherapy, but he became an authentic pioneer in its application.” p.216

The start of Roosevelt’s return to political life began in 1924 when he gave the nominating address at the Democratic National Convention; he would do so again in 1928. In addition, in 1928, he received the Democratic Party’s nomination for Governor of New York State. He would win the governorship while Herbert Hoover crushed Roosevelt’s predecessor, Al Smith, in the general election. As Governor, he began by cleaning out some the corruption by creating the New York Public Services Commission. When the depression hit, the Governor took action creating a New York relief system that would be the preview of the Federal Emergency Relief Legislation. With Frances Perkins appointed to the position of Secretary of Labor the administration was able to pass a series of Labor Reform laws protecting workers from abuse.

Hoover tried to have Roosevelt unseated in the 1930 but that effort failed and Roosevelt became the Democrats nominee for President in 1932. Roosevelt broke tradition and accepted the presidential nomination in person, he would go on to defeat Hoover in the election and become our thirty-second president. At his inauguration President Roosevelt, would challenge the nation letting them know that the only they had to fear: was fear itself.

As President, Roosevelt would dive into action. He had his legendary first 100 days passing all sorts of legislation to deal with the crisis. The President had brought Harry Hopkins and Frances Perkins with him from New York State to the national government to head up the commerce and labor departments. The New Deal would be revolutionary government action for good that would help the average person in incredibly horrible times, and put a huge dent in the Great Depression.

“By almost any measure the economic surge since 1932 had been remarkable. National income had risen by more then 50 percent, 6 million new jobs had been created, and unemployment had dropped by more than a third. OF the 8 million still unemployed, more than 70 percent worked at least part of the year for the WPA or were enrolled in the CCC. Industrial production had doubled, stock prices were up 80 percent from their 1933 lows, farmers’ cash income—which had fallen below $4 billion in 1932—rose to almost $7 billion in 1935, and corporate profits, deep in negative territory when Roosevelt took office, had zoomed to nearly $6 billion.” p.360-1

(Eleanor, as First Lady, would not only be an important advisor to her husband; but would often be the eyes and ears of the administration, traveling where the President could not.)

(Harry Hopkins, Secretary of Commerce, Head of the W.P.A)

The same year Roosevelt became the President of the United States, Adolf Hitler had risen to power in Germany and was repairing and rearming his state at the same time Roosevelt was instituting the New Deal. When World War II started, isolationist feelings were still strong and popular opinion blamed the Great Depression on World War I. President Roosevelt would create an ‘Arsenal of Democracy’ to aid the allies in their fight against Hitler’s Germany. Due to world events, President Roosevelt decided to seek a third term as president, something no incumbent had ever tried. He succeeded and continued to try to help the allies then when the United States was attacked by Japan on December 7, 1941, Roosevelt asked Congress to declare war and they complied.

World War II was a war the entire country followed and was involved. Unlike modern wars, which require little to no sacrifice from the civilian population, World War II required a huge home front involvement. Roosevelt would keep the public up to date with his wartime ‘fire-side chats.’ The United States was fighting a two-front war, the Atlantic and the Pacific. Roosevelt had General MacArthur in command of the Pacific Front, General Eisenhower in Europe, and General George Marshall directing everything militarily stateside. In addition, President Roosevelt had Admirals Nimitz and King providing the military leadership for the Navy.

“In retrospect, the establishment of the command structure to the fight the war was an unprecedented achievement that reflected the extraordinary ability of Churchill and Roosevelt to saw off minor differences and find common ground. Roosevelt, unlike Lincoln, was also well served by this long familiarity with the Army and Navy and his ability to pick effective military subordinates. Leahy, Marshall, King, and Arnold were exactly the right men for the job, and they served in their posts throughout the war. In their own way they were ruthless taskmasters, loyal to the president, and, when pushed by FDR, worked effectively with the British counterparts.” p.546

(FDR communicating with the American Public) 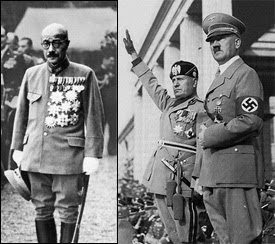 Although from his greatest triumph also comes his greatest failure. He allowed fear and superstition in the country and inside the administration to lead to the horrible internment of the Japanese living in the United States, regardless of citizenship status. Although Smith goes into explaining how the push for this came from the bottom up, and Roosevelt himself did not originally seek it, as Roosevelt’s successor would later state, ‘the buck stops here’ and responsibility ultimately lays with the president.

Roosevelt relationship with the other member of the ‘Big Three,’ Joseph Stalin, was probably the more interesting. Although, it somewhat damaged his reputation because of the ‘Yalta Myth***‘ Roosevelt was able to get along better with man he nicknamed ‘Uncle Joe’ much better then Churchill was able to, and often Roosevelt would act as the glue of the alliance****.

“At one point Stalin wryly suggested that 50,000 officers of the German general staff should be summarily executed at the end of the war. Bohlen saw that Stalin was smiling sardonically as he spoke, and so did FDR. ‘Not fifty thousand, but perhaps forty-nine thousand,” the president shot back. Churchill was not amused. He did not perceive that Stalin was goading him and rose to the bait. Britain would never tolerate such an outrage, he passionately responded. ‘I would be rather taken out in the garden here and be shot myself rather then sully my own and my country’s honor by such infamy.’” p.590 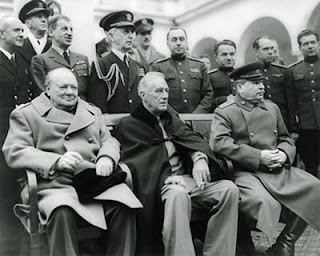 This book is an incredible work by Jean Edward Smith; it is just as good as his work on President Grant. Smith has a brilliant narrative that holds the reader’s attention and does justice to his subject. For the reader, Roosevelt figuratively comes back to life as the story of his life is laid out before them.

*Although this sounds gross, they were actually just fifth cousins so practically unrelated.

**There is some exception to this; he did fight for baby bottle safety after the death of his son FDR, Jr. (He later had another son named FDR, Jr.)

***The myth is that Stalin swindled sick Roosevelt at the Yalta Conference. Churchill would later point out that if Yalta was so good for Stalin, why did soon break it?

{First Video is from the HBO movie Warm Springs, the second and third is from C-span}