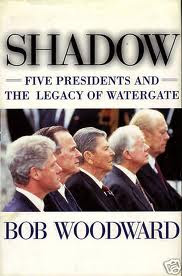 A review of Bob Woodward’s Shadow: Five Presidents and the Legacy of Watergate (1999)

Bob Woodward, who with his partner, Carl Bernstein, brought down the Nixon Administration with their exposes of Watergate. Twenty-five years later, Bob Woodward would take a crack at the legacy that Nixon left behind on the presidency itself and how that institution would have to cope with restrictive laws and scrutiny that it did not have in the past. The book examines how the five presidents who followed Nixon have had to handle that terrible legacy. It is also however, a strong indictment on the very existence of the Office of the Independent Counsel that was created in response to Watergate. 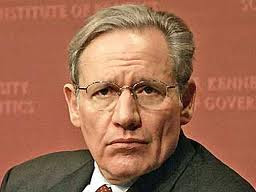 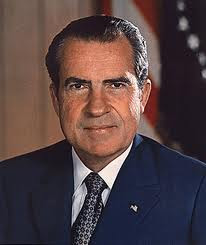 Woodward begins with Gerald Ford the immediate successor who, after already making history by being the nation's first appointed vice president, becomes President on the moment of Nixon’s resignation. The first major crisis he would have to deal with would be rather or not he, President Ford, should pardon Nixon, who did not want to admit to doing anything wrong. The new President would have a hard time with new national mood, which was very sensitive to any perceived abuse of executive powers. Woodward's analysis is that Ford suffered from only having run in campaigns no bigger than a Michigan congressional district. Every other president, even former 'accidental presidents,' had to at least campaign in one national campaign. Ford was unique in the fact that he did not have the experience coming into the presidency, which made it difficult for him to function. 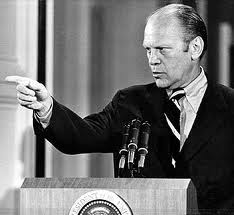 “As the years have passed, I have become more and more convinced that Ford made the correct decision in pardoning Nixon. Nixon had already paid the political death penalty of resignation, and for Ford a pardon was the only way of ending the public and media obsession with his predecessor's future. The problem in the pardon was in Ford's execution. To be successful, the pardon required elaborate orchestration. The public, Congress and the media needed to be prepared. Ford should have mustered all his sense of decency to explain his actions to the public. He should have seen the danger and avoided the discussions of the pardon with Haig. He should have required Nixon to sign a statement admitting his guilt and release it with the pardon.”p.37

In 1977, Jimmy Carter replaced Gerald Ford under the promise he would never lie to or deceive the American people. That was a promise he could not keep. Worse, Carter in signed into law the Ethics in Government Act that was intended to clean up government and prevent future President Nixons, and was a disaster. Failing to understand that the Founding Fathers always knew that man like Nixon would come along, and thus created a system of checks and balances and a free press within the Constitution, the U.S. Congress and President Carter decided to that another 'President Nixon' should be made impossible. The law would allow what would be later called an Independent Counsel, to become a fourth branch of government. The Carter Administration would pay dearly as investigation after investigation would go on for months at a time.

“The shadow the two-month Lance scandal cast was long, deepening the alienation Carter felt toward the Congress, the media and Washington. The implicit promise that he would never allow a repetition of the national Watergate embarrassment was in question. Carter realized he had somewhat ostentatiously sought high ethical and legal standards but was quick to seek exception for a friend.” p.61

The book takes a small detour to discuss Theodore Olson's brave fight against the Act. Olson, who after this book was written would go on to argue for George W. Bush in Bush v. Gore and is now trying to overturn California's ban on gay marriage, fought an independent counsel all the way to the Supreme Court and lost. Morrison v. Olson was one of the most wrongly decided cases in history, but Justice Scalia* had a powerful dissent that hopefully may become the majority opinion if the Supreme Court ever had to review a case like it again.

“Olson found immense comfort in Justice Scalia's dissent, which said the dispute was about one thing: 'Power.' Since Article II of the Constitution vest all executive power in the president, including the power to investigate and prosecute crimes, Scalia wrote that the law modified the Constitution. 'How much removal of presidential power is too much? Many countries of the world get along with an executive that is much weaker than ours—in fact, entirely dependent on the continued support of the legislature. Once we depart from the text of the Constitution, just where short of that do we stop?' The prospect of an independent counsel turned loose was 'frightening...One must grieve for the Constitution,' Scalia argued.” p.94

In his section on Ronald Reagan, Woodward skips right to the last quarter of Reagan's presidency when the Iran-Contra affair was heating up. Judge Lawrence Walsh, who would be the Independent Counsel assigned in this case would carry on his investigation for six years, long after Reagan left office, and did not stop until President Bush pardoned most everyone. Walsh even had Reagan under oath when he was clearly severely affected by his Alzheimer's disease creating a pathetic and sad show. 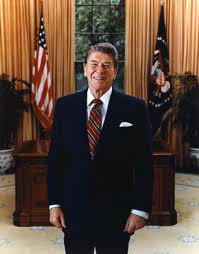 “Walsh respected what Reagan had done so far as president. He did not sense public anger with Reagan, as had been the case with Nixon. He decided to move carefully. He would try to make cases against North and Poindexter, and then see what developed. He had no plan to prosecute Reagan, although many in the White House, Congress and the media assumed he was moving to lay the grounds to impeach the president. Walsh suspected that President Reagan knew about the diversion of millions of dollars from the Iran arms sales profits to his beloved contras. But he couldn't project precisely where he was taking his investigation. 'I sort of move as I feel,' he said. His style was to be deferential to the president, but not to his men.” p.131

George Bush would have to deal with many scandals during his own presidency. One was the Savings and Loans scandal involving his son, Neil Bush, and the author was Walsh investigation of Iran-Contra that he inherited from his predecessor. Reading this book over decade after it first came out, I am a little amused by Woodward's reasoning for George Bush's problems. According to Woodward, Bush lacked the killer instinct that most politicians have. I find this interesting because his son, President George W. Bush, clearly did not lack that instinct. 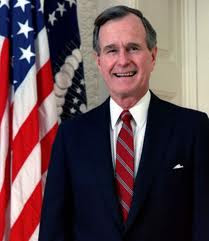 “Bush's political skills were interpersonal—the chummy heads of state club he managed so well and loved even more. Struggle, name-calling, digging into a motivation or person's life deeply offended him. He generally didn't make noise or protest. He had built his career as the patron of other Republican presidents, turning setbacks into opportunities. Nixon had rescued him from defeat in 1970, after he had lost the Texas Senate race, appointing him United Nations Ambassador. Ford had made him director of central intelligence, his first major executive post and one with mystique. Reagan had selected him to be vice president after he lost the nomination.

Bush had played by the accepted rules of the Republican Party and gentlemanly restraint had served him well. But the same qualities that had helped Bush reach the presidency hurt him once he became president. He had not acquired the political skills that many politicians develop through struggle and adversity.” p.223

The book then turns to President Bill Clinton, who was president at the time of the book's publication and who over half this book is about. President Clinton would face the worst attack on the institution of the presidency since Andrew Johnson was impeached. In fact, Clinton would share that legacy with the first President Johnson. The attack on Clinton was in part his own fault, not just for his foolish behavior, but also because he did not let the Ethics in Government Act expire when he should. Not that the President was not warned. 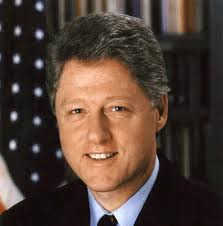 “In any form, Nussbaum was opposed. 'Here is an institution I understand,' he told Clinton. 'It is evil. They have one case. They have unlimited resources. They have no time limit. Their entire reputation hinges on making that one case.'

Nussbaum recalled for the president that when he had worked as a prosecutor, he had many cases going, often simultaneously. If one didn't work out he could turn to another in the stack. The process naturally drew the prosecutor's attention to the most obvious and important crimes—the ones with the best evidence. In contrast, an independent prosecutor closed the office only when no crimes were found. It becomes a magnet for allegations, Nussbaum said. The office might as well be an advertisement for people to bring in dirt. The Justice Department is at least accountable to the president in a sense on a president's side, he argued. The Justice Department would at least receive and evaluate allegations with a presumption of innocence. An independent prosecutor can and often does operate with a presumption of guilt, he maintained.” p.234-5

Clinton would endure an assault on him and his presidency that none of the Founders could have imagined. The President found himself being degraded and humiliated in a way no president should have gone though. His personal sins were exposed in ways that had nothing to with the government. Clinton would be impeached and acquitted. After the public uproar the Office of the Independent Counsel would be abolished, hopefully for good. Although, this book was published prior to that great event happening. 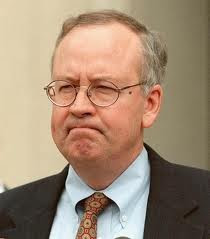 “During the pre-Lewinsky phase of the Whitewater investigation, from 1994 to early 1998, the Clintons and their attorney David Kendall reacted too many times as if the scandal were Watergate. They seemed to be hiding. Scrambling for cover, the Clintons and their lawyers played their parts too well. The forest is full of wolves, Kendall said. The forest is full of wolves, Kendall said. He believed that some of Starr's deputies were so hostile and aggressive that they had to be beaten into the ground. He had a strong case after 1996. But earlier, in 1994 and 1995, the president, Kendall and Starr should have worked out an arrangement to end the investigation at any reasonable cost. The prolonged investigation became an abuse in itself. Starr's decision to send a massive narrative of the Clinton-Lewinsky sexual relationship to Congress as part of his impeachment referral was pathetic and unwise. His determination to continue the marginal investigations and prosecutions after he had essentially completed his Clinton inquiries made no sense. Starr had lost his way.” p.515-6

This is book is a fascinating look into American Government of the late twentieth century. It no longer has the same 'feel' when it first came out since it is becoming more history than news. Since this book was written we have had two presidents and I find it difficult to envision a Starr-like investigation into a president in the era of the 'War on Terror' and that is good thing. If a president is ever again impeached, let it be for a real reason.

*Who I disagree with on many things.