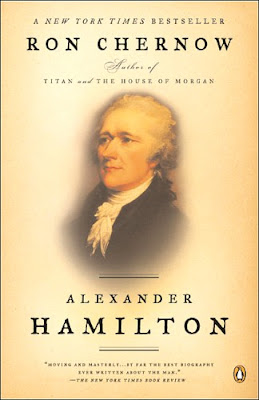 My favorite founding father by a mile is Alexander Hamilton. He first became so when I saw the History Channel’s Founding Fathers mini-series based on Joseph Ellis’ book by the same name. Chernow does Mr. Hamilton justice, in this incredible work, he tells the tale of the amazing immigrant who would rise up and help found the United States of America. Hamilton, a genius who anything he touches turns to gold, becomes a self-educated lawyer, military officer, strong player in the writing and establishment of the Constitution, party leader, and member of George Washington’s cabinet. Chernow captures the highs, lows of a career that helped found a nation, and changed the world.

Chernow’s tale begins in the early 1850s an elderly widow Elizabeth Hamilton is still alive half a century after her husband’s fatal duel with infamous Aaron Burr. Mrs. Hamilton is now treated as a type of local celebrity since she is the last physical link to the country’s glorious past. (And in the 1850s, the American people have a lot of reason to feel nostalgic for the country’s past since they face an uncertain future.) The old woman still has a bust of her famous husband for she still cannot let go of what happened decades past.

Alexander Hamilton grew up on the island of St. Croix; there he lived a very unusual life exposed to many interesting things, not all them were good. Slavery was huge and brutal, and at the time, it dominated St. Croix. This exposure would later inspire Hamilton’s abolitionism. Another unfortunate encounter he had was the law; that after the death of his mother the legal aspect of his parents relationship, being not legally married, meant that he and his brother had almost no rights in a court of law.

“There was to be no surcease from suffering for the two castaway boys, just a cascading series of crises. Heaps of bills poured in, including for the batch of medicine that had failed to save their mother. Less than a week after Rachel died, the probate officers again trooped to the house to appraise the estate. The moralistic tone of their report shows that Johann Michael Lavien meditated further revenge against Rachel at the expense of her two illegitimate sons. The court decided that it had to consider three possible heirs: Peter Lavien, whose father had divorced Rachel ‘for valid reasons (according to information obtained by the court) by the highest authority,’ and the illegitimate James and Alexander, the ‘obscene children born after the deceased person’s divorce.’ The whole marital scandal was dredged up again only now at an age when Alexander and his brother could fully fathom its meaning. At a probate hearing, Lavien brandished the 1759 divorce decree and lambasted Alexander and James as children born in ‘whoredom,’ insisting that Peter merited the entire estate, even though Peter hadn’t set eyes on his mother for eighteen years.” p.25

Hamilton escapes from this and eventually finds his way to the United States just in time for the American Revolution. Going through a series of adventures, he finds him on the staff of General George Washington, and there he is able to have a significant impact on the Revolution and the country. After the Revolution is over and the Articles of Confederation prove to be a disaster for the country, Alexander Hamilton not only aids in writing the new constitution but also helps ensure, that co-authoring the Federalist Papers with James Madison and John Jay, New York will ratify it.

“The Federalist is so renowned as the foremost exposition of the Constitution that it is easy to forgot its original aim: ratification in Hamilton’s home state. Printed in only a dozen papers outside of New York, its larder influence was spotty. In places where it did appear, the verbal avalanche of Hamilton, Madison, and Jay overwhelmed hapless readers.” p.261

When the new government was established, President Washington appointed Hamilton the nation’s first Secretary of the Treasury. As a member of the new cabinet, Hamilton would be engaged in a legendary conflict with the Secretary of State, Thomas Jefferson. Since Washington was an American nationalist, he most often sided with Hamilton, angering Jefferson. However, Hamilton and Jefferson were able to put together one of the most important deals in the nation’s history: a southern capital for federal assumption of state war debts.

“The dinner deal to pass assumption and establish the capital on the Potomac was the last time that Hamilton, Jefferson, and Madison ever cooperated to advance a common agenda. Henceforth, they found themselves in increasingly open warfare.” p.331

Thomas Jefferson would go on to led the opposition and be elected vice president to John Adams in 1796. In part because of a public break with Adams, Hamilton would help usher in Thomas Jefferson to victory in 1800. In 1804, in a feud with his former friend and law partner, Aaron Burr, the Vice President of the United States under President Jefferson, Alexander Hamilton was killed in a duel. He was less the fifty years old.

Yet, in the end, Hamilton may have lost the battle and his life, but he won the ultimate war. We live not in Thomas Jefferson’s America but Hamilton’s. It was Hamilton who envisioned a powerful United States that was both an industrial and agricultural, not Jefferson. Hamilton who dreamed of a world power set a course that the nation would ultimately achieve. Ron Chernow’s masterpiece discusses all these events and more. I would most definitely recommend a highly enjoyable book to anyone interested in this incredible person and the history of our nation.