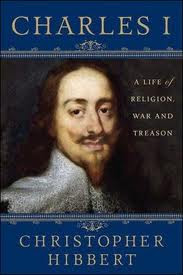 A review of Christopher Hibbert’s Charles I: A Life of Religion War and Treason (1968 original) (2009, my copy)

His life could have been much better had his older brother Henry lived. That way England could have had its King Henry IX and Charles, the Duke of York, could have been a great art director. Instead death took his brother’s life and sent Charles to a position in which he was so over his head that he lost it.

During the course of this book I wondered how a monarchy so powerful in the days of the Tudors could become so weak and feeble. Part of King Charles’ problem was he was the son of King James. King James I had often boasted of his absolute power and wondered why his ancestors allowed an institution such as Parliament to come into existence. If King James had only done a tad bit of research he may have discovered that Edward Longshanks stole the idea from Simon De Montfort. King Edward I thought it would be best to have a meeting where the various interests of the kingdom could discuss any problems the kingdom was facing, raise money, and if anyone had any grievances to be able to air them. This allowed the King to govern more effectively and for most of its history Parliament was just a state of being as opposed to an institution with its own interests. For many effective monarchs, Parliament was just a method used by the King to strengthen his own power. One could imagine that Edward I, Edward III, Edward IV, Henry VII, Henry VIII, or Elizabeth I could have handled the problems the King Charles had to deal with far more effectively than he did. For King Charles I was brought up listening to his father’s theories and believed every one of them. 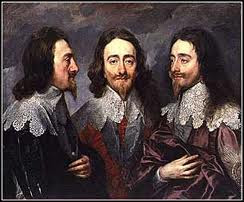 (Charles I was a great patron of the arts, his personal painter Sir Anthony van Dyck made many masterpieces for him, including this Charles in three positions)

Charles was clearly the wrong man for the job. He was so stubborn in his position that he would never negotiate until it was too late, and then, when willing, he wanted the previous terms offered to him. He had almost no sense of his situation. Despite being absolutely sure in his position he was slow to action. Everything he tried from his attempts to arrest Pym and other members of the Commons to his battle strategies he was too slow and unimaginative.

“Underlying melancholy there was a certain lack of sympathy in the King’s responses, a defensive rejection of an intimacy that might reveal him as a less assured man than he tried to be. Few men ever felt that Charles really liked them. Few servants ever felt that their services were truly appreciated: if they did not do their duty they were politely dismissed, if they did do their duty they were doing what was expected of them, they were treated well but rarely with a hint of warmth or affection.” (p.136)

After his defeat and imprisonment he remained as stubborn as ever, he made several attempts to escape and he tried to hold out hoping things might turn his way again. His moment of glory and greatness came, ironically, at his lowest moments. An American statesman, Senator Al Gore Sr., once observed that in defeat one could often let their glory out. Charles could and did at his trial and execution. He directly challenged the court questioning its legitimacy. His bravery and dignity at his own execution turned him into a martyr.


The one drawback of this book is there is no real discussion on the legitimacy of King Charles’ trial. When Louis XVI is tried by his people it is done with the monarchy abolished and the former King reduced to just plain citizen Louis Capet. When King Charles is tired he is tired as the King of England. That the King could be tried under existing laws is something absurd when one thinks of it. Yet this is never brought up, the only thing about the legal irregularities brought about was the mention that most of the nation’s top attorneys refused to participate.


In the end I found this to be a great an informative book. King Charles I was probably the second worst King of England, with only King Edward II being worse. Was Charles a tyrant like Richard II? I do not think so. Yes, he could be brutal, but no more than the Tudors or many other great kings and monarchs of this time period. I do feel what replaced him was, in the end, far worse.

{Video is from the movies Cromwell and To Kill a King}