Some People Seek Greatness Others Have it Thrust Upon Them 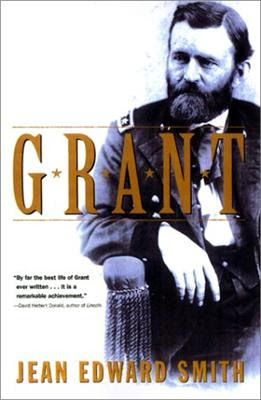 All he really wanted to be was a mathematics professor. Had the life plan Ulysses S. Grant made while at West Point came true, the world would have never heard of the man who would become our eighteenth president. Moreover, the whole world would have been worse place then it is today. Grant’s life is in itself a remarkable story that sparks an interest form the curious: a compassionate man who becomes one of world’s most feared generals.

Smith brings to life an incredible Grant, one who is so easy going that when his name was published wrong at West Point, instead of ‘Hiram Ulysses Grant’, he was listed as ‘Ulysses S. Grant’; the young cadet just accepts the change. A young solider in the Mexican War, he finds himself in a conflict he cannot stand. Separated from his young family, he takes to drinking and is forced to resign. His life hits rock bottom he tries to peddle wood to and takes up odd jobs to try to support his family. At one point, his wife’s family gives him a slave, which forces Grant to confront an issue that he never really thought about.

“The circumstances are not clear, but sometime during his last year at White Haven he acquired possession of the young slave Colonel Dent left behind, a thirty-five-year-old man named William Jones. Grant’s views on slavery were ambivalent and Jones was the only slave he ever owned. When he moved to St. Louis, Grant was initially tempted to rent the man out, but soon decided against it. On March 29, 1859, he went to circuit court and filed the manumission papers to emancipate Jones. Grant never discussed his motives, but the action speaks for itself. Able-bodied slaves sold for a thousand dollars or more, and Grant surely could have used the money. Instead, he set Jones free.” p.94

When the War breaks out, Grant joins the forces of the Union. He receives a position as a colonel of volunteers; he is quickly promoted to brigadier general of volunteers and begins to win battle after battle. General Grant at first is unpopular at home because of casualties, but he has the important support of President Lincoln, soon he becomes popular all over the north as he keeps piling up victories in the western front. He earns himself the rank of major general in the permanent army—the highest rank at the time—and is brought back to Washington to be granted the new rank of Lieutenant General, be given supreme command of the Army, and personal oversight of the Eastern front. Grant would defeat General Lee and win the Civil War.

(Interesting point about Lee, as a Confederate officer he wore the uniform designed for a colonel, because that was the highest rank he held in the Union Army, and would not wear a general's uniform until the South had won, which they never did.)

“The generals greeted each other cordially. Grant took a chair in the middle of the room and Lee resumed his seat by an unlit fire, while Marshall remained standing beside him. ‘What General Lee’s feelings were I do not know,’ Grant said later. ‘As he was a man of much dignity, with an impassive face, it was impossible to say whether he felt inwardly glad that the end had finally come, or felt sad over the result, and was too manly to show it. What ever his feelings, they were entirely concealed from my observation; but my own feelings, which had been quite jubilant on the receipt of his letter, were sad and depressed. I felt like anything rather than rejoicing at the downfall of a foe that had felt so long and so valiantly.’ The two men chatted easily for a few minutes, recalling the time the met in Mexico, after which Babcock ushered in Sheridan, Ord, and Rawlins, as well as a number of other Union officers. The newcomers arranged themselves behind Grant as quietly as swords and spurs would permit. Grant made no reference to their coming. Lee showed no resentment at their presence.” p.404 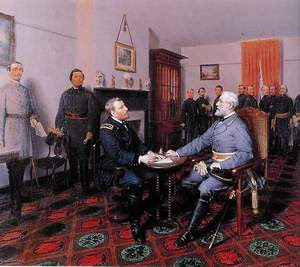 (Famous scene that ends the bloodiest war in American history.)

After the war, Grant played an important part during the accidental and terrible Johnson administration that was created in the wake of President Lincoln’s assassination. Grant often acts as the cool head in the conflict between President Johnson and the Congress. In 1868, the same year he was created the army’s first four-star general, he became the Republican candidate for president.

(One the worst, if not the worst president)

Smith makes a compelling case that Grant’s presidency that is generally considered to be one of the worst, should in fact, be considered one of the best. Smith points out that it was Grant’s presidency that gave us the inter-continental railroad, brought a swift end to the first Ku Klux Klan, and created a Civil Service Commission that would be a forerunner to the Civil Service that was created in during the presidency of Chester A. Arthur.

“To the end of his life Grant viewed his veto of the inflation bill, together with passage of the Resumption Act, as the most important accomplishment of his administration. The introduction of a stable currency paved the way for the enormous growth of the American economy in the last quarter of the nineteenth century—just as currency reform in Germany and Japan precipitated their extraordinary economic revival after World War II. Inflation was tamed, speculation reined in, and the credit of the government firmly reestablished. By the century’s end, the American dollar had become the international symbol of financial stability. Grant’s veto of the inflation bill also marked a political benchmark. From 1874 onward, the Republican party became the party of economic conservatism, fiscal restraint, and a sound dollar. The Resumption Act was not only a pivotal event in restoring the American economy, it also marked a fundamental redefinition of the nation’s political parties. Grant imparted to the Grand Old Party a commercial, pro-capitalist stance that replaced emancipation as the party’s raison d’etre.” p.582

Grant’s post-presidency was also an adventure itself. He world go on a trip that led him to meeting people such as Queen Victoria, Otto Von Bismarck, Tsar Alexander II, and Emperor Meiji of Japan. He returned and tried to claim the presidency once more but failed to win the nomination. That loss would be a blessing because in that presidential term Grant developed throat cancer, and would spend the rest of his life writing his memoirs.

(Grant on his post-presidential world tour)

I highly recommend this excellent book. Jean Edward Smith has a masterpiece here it is very intimate portrayal of our eighteenth president. No one who reads this will be disappointed.