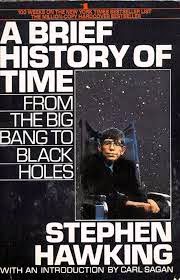 A review of Stephen Hawking’s A Brief History of Time (1998, edition)

When I was reading the Memoirs of Ulysses S. Grant or the works of Julius Caesar, I found when they explained military tactics or organization to me I understood it the same way I understood chess.  With chess I get how the pieces move but I don’t understand strategy in any meaningful way.  With Hawking I found that I generally understood concepts as he was explaining them, however when it comes to understanding it to the point I could confidently explain it to someone else I was still a little off.  This is more my own limitations however, not Hawking’s.

It was similar to when I was reading the Short History of Nearly Everything by Bill Bryson; I found I really enjoyed the discussion on how discoveries were made and how the scientists with their quirky personalities interact with each other.  I often find the later more interesting than the discoveries themselves.  The difference of course with Bryson’s work is that Hawking is an actually player in his field so it creates a more personal involvement.

I greatly enjoyed the parts of the book when he would discuss how his personal life challenges and odd ball personality would impact his work.  One example is when his disability makes an ordinary task such as going to bed long and boring, as Hawking has to let others assist him for such things, so he puts his mind to something else and makes tremendous discoveries.  One of my favorite things I learned about him was that he places bets with other scientists against his own theories being true.  This way if he was wrong about the science he would at least have won something.

I highly recommend this book it is a good eye-opener into how universe works.