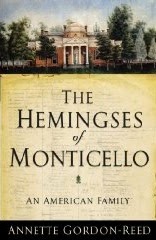 A review of Annette Gordon-Reed’s The Hemingses of Monticello: An American Family (2008)

Despite that the rumors of the relationship between he and Sally Hemings plagued President Jefferson throughout his presidency, as people faded into history Thomas Jefferson’s secret family became more invisible to historians.  Some of this is understandable; after all if James Callender reported a sunny day you would logically assume that it had been hailing.  Also Jefferson’s legal white family did a good a job of covering it up, making sure that there would be no letters surviving in which Sally was acknowledged.

In 1998, with DNA test results it was confirmed that it was most probable that Thomas Jefferson was father of Sally Hemings’s children.  When the DNA results came out denial was replaced with a different reaction.  Jefferson suddenly became a sex-crazed man who fornicated with every female slave he saw.  (Remember the Jefferson DNA results came out when President Clinton was being investigated.) Every story about him was now believed.  By the year I graduated High School a TV movie was made called An American Scandal: The Sally Hemings’s Story starring Sam Neill (from Jurassic Park) as Thomas Jefferson.[1] The movie seemed to involve everything that was said about Jefferson from Callender himself.
Dr. Gordon-Reed wrote her first book on Jefferson-Hemings story in 1997.   That book titled Thomas Jefferson and Sally Hemings: An American Controversy, which I have not yet read, was proven right within a year.  This book continues on some of the themes of first one with a larger scope.  The Hemingses of Monticello focuses on the entire Hemings family that resided at what is now a historic landmark.  Gordon-Reed recreates events for her readers as best possible with the remaining evidence to uncover what really went on at Monticello.

The author tends to write from a left-wing academic perspective.  That is not a criticism just an observation.  What is interesting however was reading some of the reviews of goodreads, many accused the professor of being ‘angry’ something I find absurd.  Yes, she calls American slavery out for the evil oppressiveness that it was.  Yet, if anything she almost strikes me as a Jefferson apologist; when discussing Jefferson she often brings up the culture he was raised in, political, economic, and social pressures that he was facing.  One can argue that she makes a ‘judge by his own time period not ours' defense except, unlike some of her critics, she actually does it very well.
The most famous member of the Hemings family is Sally, seeing that she is the one who was involved intimately with President Jefferson.  This makes sense when one considers the only reason we know about any of these people is because of the legal status of ownership that Jefferson had over them.  Since Thomas Jefferson was so important to the history of the county and the world, anyone who played a role in his life by default becomes important.  Yet the fact that Sally is the one we most know presents a type of misconception, if anyone had spent any time at Monticello they would know who the Hemings were.  In slave hierarchy of Monticello the Hemings family was one of the two at the top.  (The other was the Grangers.) Nevertheless while explaining this Dr. Gordon-Reed reminds the reader that they are still slaves, and cautions us against thinking of them as privileged.  Most of Jefferson’s personnel body servants were Hemings.  Members of the Hemings family did not wait on guests as maids or waiters; they were carpenters, chefs, and other artisans.  Most of the men had free reign to come and go as they pleased, the reason why is most of the story.

The story of the Hemings family begins with the birth of Elizabeth Hemings.  Her mother was an African who had been brought to Virginia as a slave by the international slave trade; her name is lost to history but the name of the man she was with is not.  He was Captain John Hemings and he was not her owner.  As Dr. Gordon-Reed explained, slave status was inherited from your mother. (Mom was free, you were free; Mom was a slave, you were a slave.)  Gordon-Reed also explained what the term concubine meant in an early eighteenth century context, far from the more foreign exotic definition the word would later take on, in this time period it meant ‘unofficial’ wife.  She explains that it was rather common for Southern slave owners who were widowed, to take a concubine.  This would be the fate of Elizabeth Hemings as she became the concubine for John Wayles, whose daughter Martha would go on to marry Thomas Jefferson.  Elizabeth Hemings was already a mother before she became involved with Wayles, they would several children together mostly famously Sally Hemings.  When Wayles died the Hemings matriarch and her children would have their world transferred to Monticello.

This story however is not only about one person or a couple but about a family.  Robert and James Hemings, who were the famous Sally’s full-blooded brothers, were a major part of both hers and Jefferson’s lives.  Their lives were interesting and atypical for slaves, the brothers had freedom of movement, could earn money by hiring out their services during times that Jefferson had no need of them.  Robert would go on to marry outside of Jefferson’s slave system and James who would go on to be become a fully trained chef in France.

It is very rare that a book can completely change your view of something.  This book however made me change my view on a very important historical topic.  That is oral history and tradition.  I have been one of those who compared oral history to playing the game of telephone throughout the generations.  I think my overall hostility to it is driven from some of the way some of its advocates will often present it: as if these are almost sacred words that can be challenged.  To me, evidence should always be viewed with a healthy degree of skepticism, one of the things that studying written sources show us is there can be contractions in various accounts, trying to get at the truth can rather tricky and I tend to distrust people who claim ‘my relative’ was there and get really weary when someone tries to add it to the historical record.  How Dr. Gordon-Reed won me over was showing how oral tradition can be balanced against written and archeological sources and used as evidence.

First, not every person who had a family history that claimed linage to Jefferson was right.  Gordon-Reed actually debunks a couple of them, while showing the strong case for Jefferson and Hemings.  She also shows how actions of family and descendants can be used to determine what the relationship between a mother and a father who were slave and owner actually was.  Gordon-Reed explains that sexual encounters were often between slave women and masters were done in one of three ways.  Rape was a primary method through violence or threat.  The second was a causal consensual sexual encounter, and third was in an actual secret relationship.  How the family of the woman acted and later spoke of the man is a good indicator on what happened.  When investigating the question of whether or not Hemings and Jefferson actually loved on another the author concludes in the affirmative, and she bases this not only on Jefferson’s actions but the actions of those around him.

“On the other hand, if they saw him acting in as decent a fashion as possible, that he was now bound to them by blood might have made at least some of them more inclined to see him in a positive light, thus shoring up the affective role that they certainly played in his life.  As will be shown in the chapter to come, members of the Hemings’s family, free and enslaved, sometimes responded to Jefferson in ways that suggest they thought of him as more a version of an in-law than the rapist of their family member.” (p.363)

In a bizarre twisted way in that relatives owned members of their own kin, the Jeffersons and the Hemingses were family.  Thomas Jefferson was united to them by both blood and marriage, his lover was his late wife’s half-sister and her children were his.  When each of them became adults they were freed and left Monticello with pockets full of money and, for the boys, a completed training in carpentry.  By leaving they would never see either parent again, for they would go into society with their true identities hidden.  This book is full of eye opening information.  I highly recommend it.
[1] I think since the movie’s release the name has changed a couple of times.

{Video is and interview Dr. Gordon-Reed did for the Big Think. Video is located on their page.}