FROM SOILDER TO EMPEROR 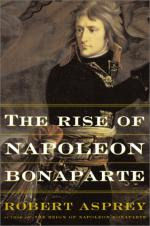 Robert Asprey’s book traces the journey of a small boy from Corsica, on a journey from solider to emperor. He would turn the entire world on its ear; nothing would ever be the same again because Napoleon existed. He would knock kings off their ancient thrones and put his own relatives upon them. He would win battles against formidable odds; he would make incredible discoveries from his time in Egypt that would change the way we look at ancient history. He was a man who fought in the army of the Republic but would give himself a crown. There are more books written about this man then any other. Yet, he loses in the end. However, this book is not about his defeats but about how he rises to become the most powerful man in world who is sitting in the center of the stage.

Napoleon starts his life in Corsica, one year after France annexed it, during the reign of King Louis XV. Asprey covers a great deal of his early years growing up in Corsica under the watchful eye of his mother, Letizia Ramolino, then being sent to school in mainland France. He was able to get into French school because his father, Carlo Bonaparte, was the Corsican representative to the court of King Louis XVI. School is difficult for him; he always teased and made to feel like an outsider because of his accented French. Nevertheless, he did well at French military school and was commissioned in the French Army.

During a leave of absence from the French Army, Napoleon would try to join the Corsican Nationalist Movement led by Pasquale Paoli. He would join them, even leading troops against the French, but he was never fully accepted. Napoleon would get away with this behavior because this was all happen as French Revolution was going down. He would find himself with a strong ally in the younger brother of the most feared Maximilien Robespierre, Augustine. Napoleon would earn his respect by his performance at the siege of Toulon. Napoleon’s actions were not one of military genius, just competence. Nevertheless, it made Napoleon a general in the French Army.

“Napoleon had never attempted to hide his preference for Jacobin rule insofar as it promised an end to tyranny and the establishment of an egalitarian republic. Nevertheless, he did not like certain aspects of the formative period: he loathed the mob attacks on the Tuileries, and he approved neither of the execution of King Louis XVI nor of the hideous excesses of the Terror. Yet, what were the alternatives? Certainly not a monarchy and rule by feudal lords. Certainly not rule by assembly, a mumbo-jumbo of screeching lawyers who could scarcely agree on the time of day, a disastrous regime that threatened to plunge the country into anarchy and open its borders to foreign invasion. No one could deny that Robespierre’s quasi-dictatorship, despite or perhaps because of its excesses, had brought a semblance of order to a torn country.” p.102

After the fall of Robespierre, Napoleon was almost imprisoned but a reactionary mob trying to bring down the Republic allowed him to demonstrate his abilities by putting it down. The Directory, the new power in France, knew it now had a champion and sent him to campaign in Italy, shortly after his marriage to Josephine, and from there, he would begin to earn incredible fame as a military commander.

“The offensive began auspiciously by pushing Archduke Charles behind the Tagliamento. ‘The enemy appears very uneasy,’ Napoleon wrote Massena on 13 March, ‘and once more finds himself caught with his pants down after executing his adopted plan. Everything presages our great success.’ Two days later he qualified this ebullience in a long operations order to Joubert which warned that under certain circumstances he might find himself beaten and ‘even obliged to take refuge in Mantua.’ Should this happen he was to play for as much time as possible to allow the main army to extricate itself. Napoleon’s major worry at this point centered on the Austrian right flank and was considerably eased when he learned the Massena had sent that column flying with a haul of 800 prisoners including its commander, the disreputable General Lusignon.” p.211

After his incredible success in Italy, Napoleon finally meets Talleyrand* and the Directory sends him to Egypt to undermine British trade routes to India. While he has initial success and made incredible discoveries, most famously the Rosetta Stone, Admiral Nelson’s victory at sea, put Napoleon’s army in a terrible position. With the wars in Europe going badly, the Directory recalled Napoleon.

“Napoleon chose to fight the big battle with tactics similar to those employed at Chabrakhyt (which must have seemed an eternity ago to his exhausted troops). This time there would be no fleet action owing to an adverse wind. Division deployed in echelons of mutually protective battalion squares, the artillery filling the intervals, the tirailleurs carefully placed. Moving up toward Embabeh, moving toward Mourad’s horsemen, he deployed Bon on the left, Vial on the right and Dugua in reserve on Vial’s flank (where Napoleon stationed himself). Reynier and Desaix’s divisions deployed ahead and to the right of the assault divisions deployed ahead and to the right of the assault divisons to block what Napoleon believed was Mourad’s natural line of retreat. This move caused the Mameluke commander to open the action be sending a corps to attack Reynier and Desaix.” p.267

When Napoleon he pulled the original coup d'état on the Directory and establish the consulate with Napoleon as the First Cousul**. From this point on Napoleon rules France as a monarch in all but name. This led to a great many positive developments, first needed bureaucratic reform in the administration of government, banking, and civil law. Military victories on land in the War of the Second Coalition, although the sea still eluded them. This period also had a great deal of set backs, a rebellion in Haiti convinced Napoleon to give up France’s empire in North America by selling the Louisiana territory to the United States under President Jefferson.

“The Bonaparte brothers, Sieyes and the coterie of generals were severally upset, and with good reason. The coup stood at a crossroad. It was one thing to disband the generally scorned Directory, but it was a far more serious matter to challenge the freedom of the elected legislature. But if that body were not quickly brought to heel the conspirators would undoubtedly end on the guillotine. No realized this more than Sieyes who had a carriage and six horses standing by for a quick escape. Ironically it was he who at this critical moment kept his cool and advised Napoleon to send in the grenadiers.” p.338

In 1804, tired of plots against him Napoleon, decided to take the crown, mimicking Roman history he takes the title emperor. In December of that year, Napoleon has his grand coronation. 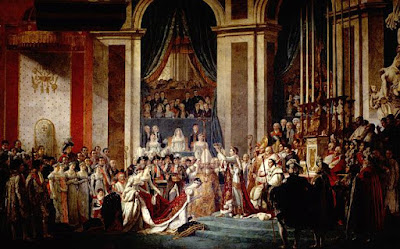 (Napoleon is Emperor, Napoleon put his mother in the picture even though she was not there)

“Napoleon’s sudden elevation to imperial status had brought mixed reactions at home and abroad. European rulers in general, including the English king, cautiously welcomed the move as indicating an end to the dangers of revolution—Napoleon, so to speak, had joined the ‘family,’ albeit as an uncouth parvenu. A good many statesmen were not so optimistic, looking on the event a consolidation of his power, a basis on which to build further mischief. Liberals everywhere were dismayed and saddened. Upon learning of the news the composer Ludwig van Beethoven, who had just dedicated a new symphony to his hero, furiously tore up the dedication, retitled the work ‘Eroica’ and dedicated it to ‘the memory of a great man.’” p.489

This book by Asprey is extremely well done; in addition to the historical information, Asprey also discusses Napoleon’s personnel life, his marriage, and relationship with his political brothers and his mother. Asprey’s work also has a smooth narrative that is easy for the reader to follow.

**In a clear allusion to the Roman Republic that was governed by two consuls, and the Triumvirates that preceded the personnel rule of Julius Caesar and Emperor Augustus.

{Video is taken from the 2002 TV movie Napoleon}