FROM MEDIAEVAL KINGDOM TO MONDERN STATE 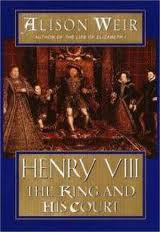 A review of Alison Weir’s Henry VIII: The King and His Court (2001)

Before I began this review I want to comment on the interview with the author located in the back section of the book.  As a student and teacher of history I think it is obvious that there seems to be people in the history profession whose sole mission in life is to make history a boring topic. They take the fascinating and make it dull. Weir describes her passion as coming not from her classes but from a novel on Katherine of Aragon. She found her classes on the Industrial revolution dominated by nothing more acts and factories. In response Weir spent most of her time studying history on her own in the library. Tragically, she was not allowed to attend the classes that she wanted because her earlier scores on the GCE exam. Weir’s success makes her personal story a strong argument against both jargon-filled history writing and standardized testing.

When people tell the story of Henry VIII they quickly switch the subject of the story from the King to the six wives. It is an easy trap to fall into for the storyteller gets to tell six stories for the price of one. Weir avoids this trap easily because she already wrote a book about the six wives of the famous king, and therefore had already scratched that itch. This book, as the title suggests, is about King Henry VIII and men who worked for him. The wives are at best supportive characters, with exception maybe to Anne Boleyn, they are trotted out only when they are relevant to what is going on. This book keeps the light on the rich characters of Margaret Beaufort, Cardinal Wolsey, Thomas More, and Thomas Cromwell. The main focus, of course, is King Henry VIII and Weir’s successful in her goal to portray Henry, as he really was not how he is generally perceived. 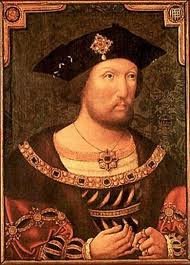 King Henry VIII has been perceived as many things. He has been seen as bloodthirsty tyrant, a misogynistic manic, and a silly puppet that was controlled by the people around him. Weir portrays Henry as a man very much of control of things in his court, often playing factions against one another. Men who served the King and gained his confidence could gain great power, but they could fall just as far. Henry could be reasonable but in times of pressure or sickness his judgment could be swift and costly. A few times he would execute a person and later come to regret it. 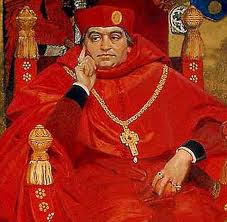 “Few could resist Henry’s charisma. ‘The King has a way of making every man feel that he is enjoying his special favor,’ wrote Thomas More. Erasmus called Henry ‘the man most full of heart.’ He would often put his arm around a man’s shoulder to put him at ease, although he ‘could not abide to have any man stare in his face when he talked with them.’ There are many examples of the kindness to others, as will be seen. Yet the King also had a spectacular and unpredictable temper and in a rage could be terrifying indeed. He was also very jealous of his houour, both as king and as a knight, and had the tenderest yet most flexible of consciences. His contemporaries thought him extraordinarily virtuous, a lover of goodness, truth, and justice—just as he was always to see himself.” (p.6)

In his life, Henry's primary rival, like all Kings of England, was the King of France. The first of these Henry had to deal with was King Louis XII. The elderly Louis XII had married Henry’s sister Mary, but he died shortly after. Then a much younger king, like Henry, came to the throne. King Francis I, who would be King Henry’s main competitor for both standing in Europe and in history*, came to the throne. Their relationship could be described as very odd.

“He ignored the advice of his lords, who thought he was putting himself at risk of some kind of treachery, and very early on Sunday 17 June, accompanied by only two gentlemen, went to Guisnes, where his brother monarch was sleeping. Henry woke to see the King of France standing over him, offering to serve as his valet and help him dress.” (p. 224)

Henry responded rather well to that incident, had it been myself I think I would have freaked out. Nevertheless, the two kings were competitors in almost every sense whether it be as kings or sportsmen. 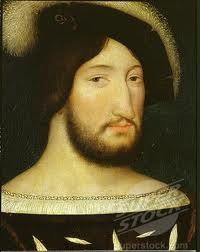 Henry VIII’s reign was of both achievement and revolutionary change. Henry’s regime would not only break away from the religious influence of Rome but it was full propaganda campaign to increase the monarchy’s power and tap into one of earliest forms of nationalism. During his reign his distrust of the nobility made him promote men to, and in, his inner circle on achievement as opposed to birth. His Privy Council was made up of the most talented individuals of the age. However, it was the establishment of the Church of England that would be his most lasting legacy. 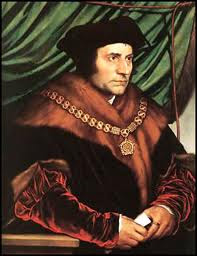 (Thomas More, author of Utopia and friend of the King. He died for the 'crime' of not acknowledging the King as Head of the Church.)

“The symbolism of empire was again brought into play. A new coinage was issued bearing the image of the King as Roman Emperor, and a third Great Seal in the Renaissance style was made, featuring the King on an antique throne and bearing the title of Supreme Head; this image was designed by Lucas Horenbout, whose portraits of the King it greatly resembles. An imperial crown was added to the royal arms to signify that Henry recognized no higher power than his own save God. There was a deliberate revival of the cult of King Arthur, from whom the Tudors claimed to be descended, and who is said to have owned a seal proclaiming him ‘Arthur, Emperor of Britain and Gaul.’ Henry VIII, it was claimed, was merely reviving his ancestor’s title and dignity. It was also asserted that England’s sovereignty had for a thousand years been mistakenly subinfeudated to Rome by the King’s predecessors: now he had redeemed it.

No English king before Henry VIII had ever been so concerned to magnify and disseminate his public image. Under Cromwell’s auspices, there was a flood of tracts and pamphlets proclaiming Henry’s heroic virtues and moral superiority. Preachers, artists, craftsmen, writers, poets, playwrights, and historians such as Polydore Vergil were called upon to use their talents to advertise and glorify the New Monarchy. Propagandists such as Gardiner portrayed Henry VIII as semidivine, calling him ‘the image of God upon the Earth’ who ‘excelled in God’s sight among all other human creatures.’ A correspondent of Sir Anthony Browne declared that the King’s subjects ‘had not to do with a man but with a more excellent and divine estate,’ in whose presence one could not stand without trembling.

The effect of all this was to turn Henry into an imperious and dangerous autocrat who became mesmerized by his own legend.” (p.349) 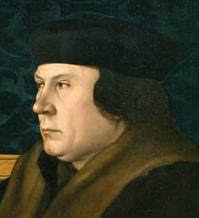 (Thomas Cromwell, the man who did most of the work for Henry's reign. He died when he fell out of favor.)

Of course the wives have to be mentioned. Because the most pressing issue to Henry was the Great Matter, Henry’s relentless pursuit for an heir. When I was young, my mother once told me that Henry VIII was a crazy man who would kill his wife if she dare gave birth to a girl, and that is very silly because it was his fault if they were girls. Henry did not hate women he had a pretty good relationship with most women he knew. Henry obsession is understandable. His father had ended a civil war almost fifty years prior. Henry had no brothers and no woman had ever ruled in their own right, although their sons and grandsons could claim through them . Henry needed a son and it would be best for him to have two. He even thought of having his illegitimate son Henry Fitzroy, the Duke of Richmond, proclaimed the heir by Parliament, but he died before it could be done.

In the pursuit of a son, he would break from Rome to divorce his first wife, and execute his second. His third wife Jane Seymour would provide him the son that he always wanted. In pursuit of a second son he would marry three more times and another wife would face execution. The wife that lived the longest, not Catherine Parr who was just his last, Anne of Cleves marriage to Henry did her a lot of good.

“Anne made the most of her independence, looking more ‘joyous’ than ever and putting on a new gown every day, ‘each more wonderful than the last’. In the years to come, she would establish a considerable reputation of a good hostess, and entertained many courtiers at Richmond. Rarely had a royal divorce had such a happy outcome.” (p.428)

(A King who had six Queens)

Although Henry was not a tyrant, as was Richard II, nor a puppet ruler. However he did have massive flaws. Henry would do revolutionary things but his method with dealing with opposition was the chopping block. He would allow himself to be persuaded to turn on dear friends, colleagues, and spouses. He would execute people and then later regret it. Henry allowed his greatest servant Thomas Cromwell to be killed, earlier he had allowed Thomas More to die for the sole crime of not acknowledging he, the King, as Head of the Church of England. (Ironically, Cromwell was one of the people who engineered More’s fall. What goes around comes around!)

*Although it could be argued that they are both out shown by Emperor Charles V.