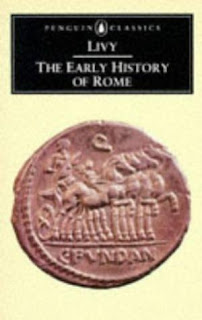 A review of Titus Livius’s The Early History of Rome Translated by Aubery De Selincourt with Introduction by Robert Ogilvie (27 B.C. original, this copy 1971)

One of the first things a person learns when studying history is the difference between primary and secondary sources.  George Washington’s war journal is a primary source of history while a biography on Washington written in the 20th century is considered a secondary source.  When the ancient world is researched these lines become a little blurred.  For example anything written by a Roman is considered a primary source on Rome even, like in this book, when the author is writing about events centuries after the events happened.  So this is technically primary source material but it doesn’t feel like it.

In his famous work Democracy in America, Alexis de Tocqueville mentioned that America was lucky to have been born already literate so when we research our origins we are sure of our birthright.  He pointed out that Europeans when researching their personal country’s beginnings it is hard to separate fact from fiction.  You see this in Livy’s work as well.  Livy is telling us Rome’s origins.  Yet the stories can be so fantastic, Romulus and Remus being saved by a wolf for example, that you can not help but be skeptical of their claims.

On narrative Livy excels, his work is never boring he tells exciting stories.  He even invites the reader to be skeptical at some of the claims that get proposed for often he throws doubt on them himself; such as suggesting that the story of King Romulus ascending to the heavens might have been a cover for a political assassination.  My favorite tale however is how King Tarquin I selected his successor.  Tarquin sees a slave boy, Servius Tullius, head catch on fire and he remained unharmed.  The King took the boy under his wing, and when Servius grew to manhood King Tarquin arranged for the young man to marry one his daughters. When the King was murdered by the son of his predecessor, the Queen begged Servius to follow the King's wishes and take the crown.

The story of Rome’s last king is one Livy’s finer stories.  Livy paints a horrid tale of a man who killed his wife and brother so he could marry his sister-in-law.  He grows bitter with Servius and openly challenges him.  He mocked his father's successor lowborn as a slave’s son to his own status as a king’s son.  King Tarquin II after murdering Servius takes the throne and rules as a tyrant.  Yet it was not his tyranny but rather the rape of Lucretia by the King's son that led the people of Rome to rebellion.  In that rebellion, Lucius Junius Brutus chased out the tyrant king.


In addition to being interesting there are times where Livy can be downright weird.  I guess you can chalk up to him being a man of his time and that time was thousand years ago.  Here is a case in point observe Livy describe the infamous Rape of the Sabine women. (That has some disturbing parallels with some political events in Nigeria in recent years.) Rome as a new city, having no women, tries to arrange marriages with nearby towns.  They are a refused so Romulus plans a party and invites their neighbors and their daughters.  While the party is going on the trap is sprung and soldiers come out and kidnap many of the young women of marriageable age and kicked their families out of the city.

“Then the great moment came; the show began, and nobody had eyes or thoughts for anything else.  This was the Romans’ opportunity: at a given signal all the able-bodied men burst through the crowd and seized the young women.  Most of the girls were the prize of whoever got hold of them first, but a few conspicuously handsome ones had been previously marked down for leading senators, and were brought to the house by special gangs.  There was one young woman of much greater beauty than the rest; and the story goes that she was by a party of men belonging to the household of someone called Thalassius, and in reply to the many questions about whose house they were taking her to, they, to prevent anyone else laying hands upon her, kept shouting, ‘Thalassius, Thalassius!’ This was the origin of the use of this word at weddings.” (p. 44)

Now at first there is nothing odd there, just a description of a rather disturbing historical event.  Where it gets weird is his later statements.

“The women in course of time lost their resentment; but no sooner had they learned to accept their lot than their parents began to stir up trouble in the earnest.” (p. 45)

Yeah, they just got over it.  And phooey on their parents who never got over their daughters being kidnapped.  Later when the Romans and the Sabines are about to go to war it is these women who play a Disney Pocahontas type role, and throw themselves in between their fathers and husbands.  This causes peace and much rejoicing.

One of my favorite pieces in the book is when Livy takes shots directly at Emperor Augustus in the form of a back-handed compliment.  In Livy’s time Marcus Licinius Crassus, grandson of the triumvir who had the same name, led a campaign against a tribe called the Bastarnae.  During the battle he killed King Deldo in single combat.  Killing an enemy's leader in single combat entitled one to a particular honor that Crassus demanded and that Augustus was reluctant to give.  Augustus used the excuse that since Crassus had not been the supreme commander he was therefore denied. (During the Republic the supreme commander was the magistrate in command. In the imperial system the supreme commander was always the Emperor even when he wasn’t there.)  When it was pointed out that said honor had not been so limited in the past and gave the example of Aulus Cornelius Cossus, who was just a tribune.  It was suddenly ‘discovered’ that Cossus had indeed been supreme commander after all.


“I have followed all previous chroniclers in saying that Aulus Cornelius Cossus was a senior officer—‘army tribune—when he deposited the ‘spoils of honor’ in the temple of Jupiter Feretrius; but there is a difficulty here, for in addition to the fact that the expression ‘spoils of honor’ is probably applicable only when they are taken by the supreme commander from the supreme commander of the enemy, and that we recognize no supreme commander apart from the man under whose auspices the campaign is fought, the actual inscription on the spoils proves that Cossus was consul when he took them.  I have heard that Augustus Caesar, founder and restorer of all our temples, enter the shrine of Jupiter Feretrius, which he had caused to be rebuilt after many years of neglect and dilapidation, and himself read the inscription on the linen corselet, and I have felt, in consequence, that it would be almost sacrilege to deprive Cossus so great a witness to his spoils as Caesar, the restorer of that very shrine.  By what error the ancient annals and the Linen Rolls of magistrates in the temple of Moneta, cited again and again as his authority by Licinius Macer, only record Cossos as having shared the consulship seven years later with Titus Quinctius Pennus, is anybody’s guess.  Again, it is impossible to shift the date of such a famous battle to the subsequent year, because Cossus’s consulship (to assume the later date) fell within a three-year period which, owing to famine and epidemics, there were no wars at all—indeed certain annals of the time, as dismal as death registers, gives us nothing beyond the names of the consuls.” (p. 291-292)

The Early History of Rome is a great read even if its status as a primary source should somewhat be questioned.