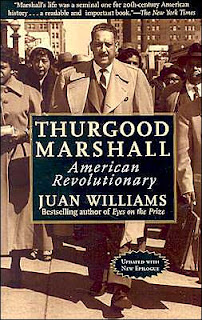 Thurgood Marshall is one of the primary movers of the United States in the twentieth century.  He was a trailblazer who challenged racial segregation head-on in the courts and won.  Marshall reversed the over a half century precedent of ‘separate but equal’ by making the Supreme Court to finally see correctly what the Fourteenth Amendment is supposed to mean.

Williams traces a young Thurgood Marshall who grew up in Maryland and was mostly uninfected by the segregation system that he would come to challenge.  It was not until he grew up and wanted to go law school when he found out that he could not get into the prestigious state law school and had to make other arrangements.  His mother, Norma, dominated the house that he grew up in.  She strongly pushed both her sons, and despite living in a world where everything was stacked against them, Norma ended up with a doctor and a lawyer.
After graduating from Lincoln University, where he attended with Langston Hughes, he was denied entrance to the University of Maryland because of his race. Marshall was forced to go to Howard Law School, which was anything but prestigious.  Fortunately for Marshall—and ultimately the United States—Marshall’s arrival coincided with the arrival of Charles Houston as the dean.  Houston’s rigorous curriculum help prepare Marshall to become the lawyer that would change the nation.

Marshall goes to work for the NAACP where he helps establish the Legal Defense Fund.  Williams’ shows Marshall taking on case after case.  He defends poor black people down on their luck, and he attacks segregation at every opportunity for everyone but himself.  While becoming the bane of Jim Crow, he felt as a lawyer he needed to obey the law no matter how immoral it was.  His work to improve the lives of the African-American community led to him earning the nickname ‘Mr. Civil Rights.’

Marshall had admirers in the white mainstream community as well as the African-American community.  Williams’ explains a great deal of strange alliances that Marshall made throughout his career, none more peculiar than his alliance with J. Edger Hoover.

As Marshall built his career by challenging Jim Crow at the graduate school and college level, but he really made history with his victory in Brown v. the Board of Education that overturned the evil of Plessy v. Ferguson.


“No one had to tell him this was the biggest case of his career.  This case could change the face of American society.  Marshall began calling conferences of the brightest minds from around the nation to discuss every angle of the case.  Lawyers, law professors, sociologists, anthropologists, and even psychologists, notably Ken Clark, all came to Marshall’s office to discuss how to convince the Court that separate but equal was a devastating burden to black people, nothing more than racism.” (p.209)

Biographies are not worth much if you do not learn something about the people whom the subject shared the stage of history.  If you read a biography of Abraham Lincoln and you learn nothing of Stephen Douglas, then the biography fails.  In the case Marshal, I learned a great deal on his Brown adversary John W. Davis.  All I knew about Davis was his status as the Democratic nominee for President in 1924 and the segregation defender in the Brown decision.  The irony is Marshall, as a law student, use to watch Davis before the Supreme Court regularly and actually admired him.  Marshall would after Brown tell people that beat Davis but knew few who did.

Davis kind of reminds me of polite anti-marriage equality people.  Who maybe personally nice and polite and may not actually hate their opponents but are completely blind to the mass of hatred that is sitting to the right behind them.
As the fifties turned into the sixties the rank and file of the Civil Rights Movement—especially the younger members—got tired of the slow crawl of integration and embraced the non-violent direct action methods.  The leader of this new generation of civil rights leaders was Martin Luther King, Jr.  There was a huge generation gap between the young pastor and the older lawyer.  Marshall thought King was nice enough young man who could give good speeches but he also felt that King and his associates got way too much credit for the work that people like him really did.  Nevertheless, he kept a united front with King and never publicly criticized him.

While Marshall had his reservations on Dr. King and the Southern Christian Leadership Conference he had a respect for them; unlike Black Nationalist movement that Marshall absolutely despised.  He couldn’t stand Malcolm X and refused to meet with him even after the later dropped his separatist ideas.  To Marshall, Black Nationalism was undermining everything he had worked for in his entire life.
While not only working for civil rights at home, Marshall went aboard under an invention from the new nation of Kenya to come and aid them in writing their constitution.  This great act of a statesmanship increased his international prestige.


During the Kennedy Administration, Marshall filled his lifelong ambition and became a judge.  Now serving on the U.S. court of appeals, Marshall’s name disappeared from the newspapers and he was now working on business cases the completely disinterested him.  Marshall was relieved when he was asked by President Johnson to become the U.S. Solicitor General.  This was an interesting switch for him, because for years he challenged the system and now he was the government’s top lawyer.
The high point of Marshall’s life was his appointment to the Supreme Court.  He would be the first African-American to be appointed to this high position.  However in reading Williams’ account Marshall’s experience of the court was not what he thought it was going to be.

Marshall is unquestionably one of the greatest American lawyers in our history. Marshall easily ranks up there with the likes of Henry Clay and Clarence Darrow.  As a justice however, although he breaks major color barrier in American society, his career on the Supreme Court was not anywhere near as successful as his earlier career had been.  Part of this is not his fault.  He lacked opportunity due the changing climate on the court.  After his confirmation a conservative backlash would have the Republicans winning five out of the next six presidential elections.  This resulted in the Court growing evermore conservative.  Marshall would find himself in the minority and writing dissents more often than not.  In addition, throughout his stay on the Court he was suffering from numerous health problems.  This would also contribute to his declining effectiveness on the Court.

I highly recommend this book.  I disagree with Juan Williams’ on many things politically but his historical work is awesome and he put together an incredible biography of one of our great statesmen Thurgood Marshall.

{Video was posted on YouTube by SECRETMOVIES; it is a long lost Mike Wallace interview.  If you can sit through the first couple of parts where the video cuts out you will see a fascinating video.  Also after the interview Mike Wallace has to do station advertising personally}.